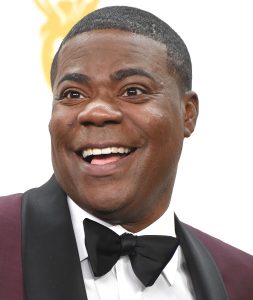 American comedian Tracy Morgan hosts his first massive award show and some people were not pleased.

On Wednesday, Tracy delivered the opening monologue during the ESPY Awards show which took place in the Microsoft Theater, Los Angeles, California.

The ESPY Award or Excellence in Sports Performance Yearly Award is an accolade currently presented by the American broadcast television network ABC, and previously ESPN.

Instead of speaking about the current athletes present in the audience and relatable topics, Tracy spoke about former football players from the 1960s, he spoke extensively about his car accident that happened in June and mentioning that his idea of fantasy football is when Janet Jackson’s bosom was exposed in 2004.

Twitter users had Tracey trending Wednesday night, with some of the tweets mentioning how awkward Tracey’s speech was and questioned whether or not anybody else couldn’t have gotten the job to host.

“Was Tracy Morgan the only one available to host #ESPYS ?”

Tracy has hosted other shows and has gotten better reviews. For example, when he hosted Saturday Night Live in 2015 and American TV show Scare Tactics.

Ziptocrats, do you think Tracy Morgan was just not ready for the big stage?