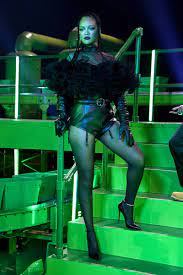 Rihanna has announced details for the third instalment of her ‘Savage X Fenty’ runway shows, set to once again air on Amazon Prime Video.

Set to air on Friday September 24, Rihanna will serve as the creative director and executive producer of the show, which will showcase the singer’s new lingerie collection.

The announcement of the show comes shortly after Rihanna officially became a billionaire, and subsequently the world’s richest female musician.

The lineup for this year’s show is yet to be revealed.