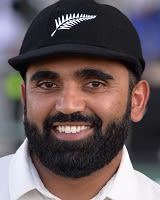 New Zealand’s Ajaz Patel became the third bowler in history to take 10 wickets in a Test innings – but India seized control of the second Test.

The left-arm spinner added six wickets to the four he took on day one to finish with 10-119 as India were bowled out for 325 in Mumbai.

Jim Laker and Anil Kumble are the only other players to achieve the feat.