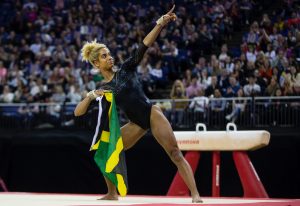 Jamaican gymnast Danusia Francis has qualified for an individual spot order cialis canada in the 2020 Olympic Games in Tokyo.

The 2016 NCAA balance beam champion and a six-time All-American, Francis finished in 47th place in the all-around at the 2019 World Gymnastics Championships in Stuttgart, Germany, scoring 50.982.

The British-born Francis qualified for the Olympics as a result of finishing among the Top 20 individuals not on a qualifying team. Francis was ninth among that group.

Francis hit all four events in the qualifying round, scoring 13.5 on vault, 12.35 on uneven bars, and 12.566 on both balance beam and floor exercise.

Francis has been cialis fast chasing her Olympic dream for the last eight years. She was an alternate for Great Britain’s 2012 Olympic squad.

In 2016, she helped Jamaica earn an all-around spot in Olympic qualifying but was not chosen to compete at the qualifying event.