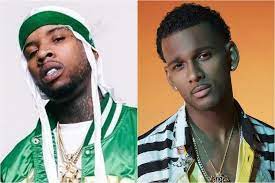 According to TMZ, Prince Michael Harty, rapper, promoter and ‘Love and Hip Hop Miami’ star got into another altercation with Tory Lanez at a night club in Miami.

The incident reportedly happened last Monday at club Vendome on South Beach. According to reports, Prince told the police that he was at his table around 4 am when he was approached and struck on the left side of his face, he then turned around and made eye contact with Lanez, who allegedly ran out of the club and into a waiting Mercedes Benz Sprinter.

The responding officer said that Prince had a visibly swollen area on his left cheek. Tory is named in the police report as a suspect for alleged battery.

Tory allegedly swung on Prince back in 2019 at LIV Miami and Prince is already suing him over that. Allegedly, Prince is now considering filing a new one for this latest claim.