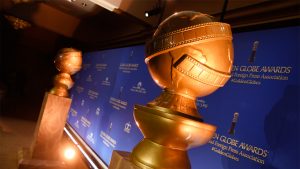 Many movie theaters have been closed for almost a year, but the Hollywood awards season began in earnest this morning with the announcement of the Golden Globe nominees.

Nominations for the 78th Annual Golden Globe Awards, celebrating the best in television and film, were announced Wednesday.

This year’s nominees are a mix of old and new, highlighting what we’ve been watching from home while in quarantine.

Netflix drew a jaw-dropping 42 nominations, including six apiece for the TV series “The Crown” and the film “Mank.”

Chadwick Boseman, who died last year after battling colon cancer, received a posthumous nomination for his role in the Netflix film “Ma Rainey’s Black Bottom.” while actress Viola Davis received a nomination for best actress in the title role of the same film.

Three women, including Regina King, are nominated for best director.

The 78th Golden Globe Awards telecast is scheduled for Feb. 28 and will be shown on NBC.