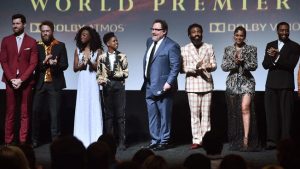 Disney’s “The Lion King” has received no shortage of remakes and spinoffs in the years since its original 1994 release. Now, as the film reaches its silver anniversary, Disney delivers a new take on the animated musical.

Cast and crew gathered in Hollywood for “The Lion King” world premiere Tuesday night, and discussed re-imagining the classic.

He also hails Beyonce’s efforts with the project. Glover is the voice behind the grown-up Simba, while Beyonce portrays his friend Nala.