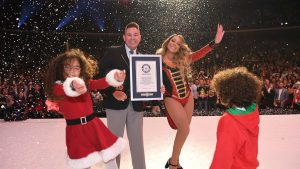 Guinness World Records honored Mariah Carey with three records Monday for her 1994 hit holiday track “All I Want for Christmas Is You.”

The trio of certificates includes highest-charting holiday song on the U.S. Hot 100 chart by a solo artist, most-streamed track on Spotify in 24 hours and most weeks in the U.K. singles top 10 chart for a Christmas song.

The pop star celebrated the news on Instagram on Monday with photos of herself clad in an appropriately sparkly “Nutcracker” ensemble and flanked by her two kids, looking equally festive in their red and green attire. She received the awards during a show in Las Vegas on her “All I Want for Christmas Is You” tour.

Carey’s achievements will be recorded in the “Guinness World Records 2020 Edition” book.

The organization has crowned her the “Songbird Supreme” for her famous vocal chops, which boast a rare five-octave range.