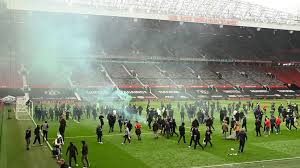 A statement from the club says “Following events yesterday, while many fans wanted to exercise their right to protest and express their opinion peacefully, some were intent on disrupting the team’s preparation and the game itself, as evidenced by activity at the Lowry Hotel and at the stadium.”

It says “Reports in mainstream and social media that protesters were able to access the stadium and pitch via a gate opened by club staff are completely incorrect.

The club says it has “no desire to see peaceful protestors punished, but will work with the police to identify those involved in criminal activity, and will also issue its own sanctions to any season ticket holder or member identified, per the published sanctions policy.”