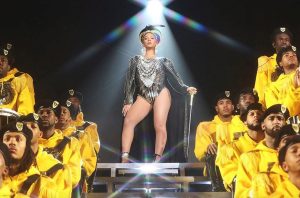 Beyoncé’s HOMECOMING: THE LIVE ALBUM, which captured her iconic 2018 Coachella set, is coming to vinyl for the first time.

The set which will be released December 4, comes with a 52-page booklet.

Beyoncé released her HOMECOMING documentary on Netflix in April 2019.

Earlier this year, she shared the song “BLACK PARADE” and then the visual album Black Is King, which featured music from The Lion King: The Gift.