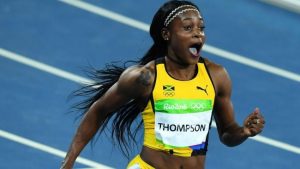 Double sprint Olympic champion Elaine Thompson-Herah has returned to training as she focuses on returning to top form in time to defend her 100m and 200m titles at this year’s Olympic Games in Tokyo, Japan.

She complained of tightness in her Achilles previously but managed to run the final of the 100m at the World Championships in Doha, where she finished fourth.

Elaine subsequently withdrew from the 200m semi-final and took no further part in the championships.