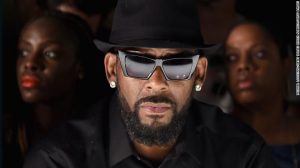 The R&B singer was in a Chicago courtroom yesterday (Tues) for his bond hearing, wearing an orange jumpsuit and shackled at the ankles.

He has been in jail for five days on separate federal indictments in Illinois and New York, and will remain behind bars after a judge denied him bail.

The Chicago Sun-Times Federal reports prosecutors described him as “an extreme danger to the community, especially to minor girls”.