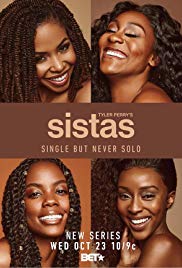 Tyler Perry’s hit series Sistas is officially returning to BET for season three.
The renewal comes as no surprise as it is the number 1 cable series among Black viewers in the key 18-49 demographic.
Sistas follows a group of fiery single Black women as they try to steer their way through their friendships, romantic relationships, “situationships”, and careers.
The series is part of a long-term pact with the prolific writer, director, producer and actor Tyler Perry, which encompasses television, film and short-form video.