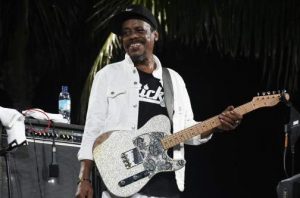 Veteran guitarist Dalton Browne died in the University Hospital of the West Indies (UHWI) in St Andrew yesterday evening.
The 64-year-old was recovering from quadruple bypass surgery which he underwent last Thursday.
His brother, keyboardist and music producer Cleveland “Clevie” Browne, confirmed his sibling’s death.
According to Clevie, his brother appeared to have been on the road to recovery.
Dalton Browne, 64, suffered a massive heart attack on October 25 and was rushed to Andrews Memorial Hospital in St Andrew. He was later transferred to the UHWI for surgery.