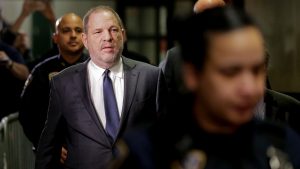 Film mogul Harvey Weinstein has reached a tentative $25m settlement with dozens of women who have accused him of sexual misconduct.

Some 30 actresses and ex-employees would share the payout in the deal.

However, it still needs signing off by all parties, Weinstein’s lawyers have not commented and some say the deal will punish those holding out.

Weinstein faces a separate criminal trial next month on rape and sexual assault charges, which he denies.

The Hollywood producer could face life in jail if convicted.