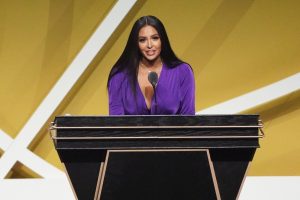 Vanessa Bryant, widow of late Khobe Bryant, finally settles lawsuit with her mother, Sofia Lane.
In what could only be viewed as an unfortunate family fallout, Lane sued her daughter last year for allegedly not paying her for her services. Lane claimed she worked as a nanny for her grandchildren (Kobe Bryant and Vanessa’s kids) for almost two decades and that prior to Kobe’s unfortunate death last year, he said he’d “take care of her for the rest of her life. She also claims that she is eligible to receive $200,000 (USD). Lane also claimed in the lawsuit that Vanessa kicked her out of the house that Kobe allegedly bought for her.
According to reports, Vanessa says that Lane was never a personal assistant to her and Kobe. She also refutes the claim that Lane was ever a nanny to her grandkids. “In reality, she only occasionally babysat my older girls when they were toddlers,” adding, “As of ten years ago, our kids were full-time students and athletes and I didn’t have another child until 2016.”

The terms of the settlement were not disclosed, but the case is over.