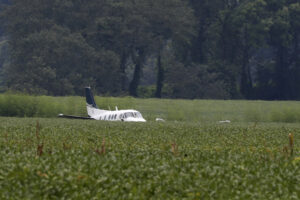 An airport worker who knew how to take off but not land, stole a small airplane Saturday and threatened to crash it into a Walmart, circling for five hours over unnerved Mississippians before ending the flight safely in a soybean field where US police arrested him.

Authorities said at a news conference held earlier, that 29 year old Cory Wayne Patterson, was uninjured after the rough landing shortly after posting a goodbye message to his parents and sister on Facebook. The message said he “never actually wanted to hurt anyone.”

No one was injured.