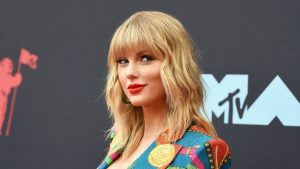 Taylor Swift’s latest album Folklore has returned to number one in America, becoming the first record to sell more than a million copies in 2020.
The star’s low-key eighth album was recorded during lockdown and released as a surprise for fans in August.
The best-reviewed album of her career, it is widely expected to pick up multiple Grammy nominations next month.
According to Billboard, Folklore sold 57,000 copies in the US last week, bringing its total to 1.038 million.
Swift’s previous album, Lover, was also the only record to sell a million copies in the US in 2019.