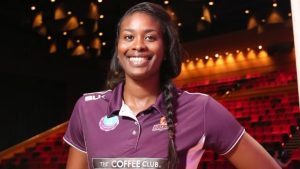 There are reports that star Jamaican goalkeeper Romelda Aiken could miss out on representing the Sunshine Girls in their three test series in England in early December.
This as Netball Jamaica may not be able to pay the required fee when she returns to Australia where she’s a citizen.
Aiken who last represented the Sunshine Girls at the 2019 Netball World Cup in Liverpool, England was drafted into the squad after Jhaniele Fowler reportedly pulled out of the team due to personal reasons.
The 31 year old finished 2nd on the scoring charts in the SunCorp league behind Fowler with 583 goals.