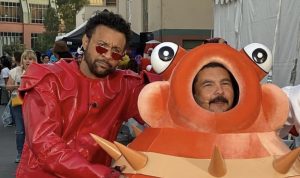 Fans are still reacting to Shaggy’s outfit during his performance in The Little Mermaid Live!, which aired ABC Tuesday night.

The Jamaican singer, who starred as Ariel’s crab sidekick Sebastian, was decked out in an all-red outfit that included red boots, red jeans, a red leather jacket and, most notably, red fingerless leather gloves in place of claws, a detail that definitely didn’t go unnoticed by the internet.

Some people watching at home quickly took to social media to hilariously express their confusion over why Shaggy wasn’t wearing a crab costume while his backup dancers were dressed up as a full crustaceans.

ABC’s senior vice president of alternative series, specials and late-night,, Robert Mills, tweeted out an explanation saying Shaggy did not wear claws, because it looked “ridiculous.”

Shaggy later uploaded a picture mexico viagra no prescription of himself in the dressing room wearing the claws.