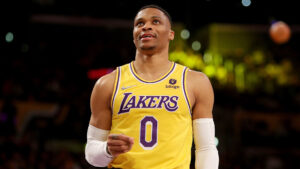 Russell Westbrook will exercise his player option and stay under contract for another season, guaranteeing a $47-million salary.

Westbrook needed to make a decision whether to opt in or become an unrestricted free agent by buy levitra on line canada today (Wed).

The move was widely expected.

After being acquired by the Lakers last offseason, Westbrook struggled, averaging 18.5 points, 7.4 rebounds and 7.1 assists, all numbers below the standards he’s set for himself.

The Lakers failed to make the playoffs.

The Lakers, who flirted with Kyrie Irving before Irving opted in to his deal on Monday, have explored Westbrook trades without success.