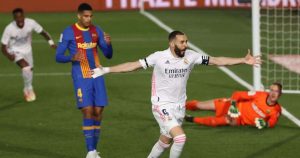 Real Madrid moved top of LaLiga for the first time since November as goals from Karim Benzema and Toni Kroos sealed a 2-1 win over Barcelona in El Clasico.

Fresh from their Champions League quarter-final first-leg triumph over Liverpool, Zinedine Zidane’s side started in blistering fashion and were two up inside the opening 30 minutes thanks to a sublime Benzema flick and deflected Kroos free-kick.

Oscar Mingueza set up a dramatic final half-hour with his second goal of the season and Casemiro was sent off in the 90th minute, but Madrid held on to seal canadian pharmacy healthcare a third consecutive win against Barcelona in all competitions for the first time since 1978.