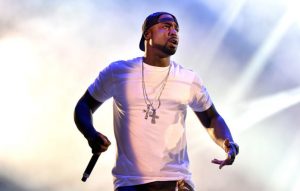 Former G-Unit rapper Young Buck spent Christmas in a prison cell after he was arrested and held without bond on a felony warrant.

According to Nashville’s News Channel 5, Buck (real name David Darnell Brown) was arrested on a felony fugitive from justice warrant on December 20.

The warrant was issued in Georgia but the charge connected to the warrant is not yet publicly known.

Buck will have to stay in prison until his scheduled court date, which is slated for May 7, 2020, because he is not eligible for bond as he’s considered a felony fugitive from justice.

The rapper previously served time for violating his probation relating to 2012 gun charges when he allegedly threatened to burn his ex-girlfriend’s house down in July 2016.

Then in 2017 he was indicted on domestic assault and vandalism charges.

Prior to this, he was charged with assault with a deadly weapon after he allegedly stabbed a man who had allegedly punched Dr. Dre at the Vibe Hip-Hop Awards in California in 2004.