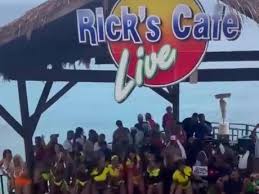 On Thursday, social media erupted with condemnation directed at the establishment for hosting the annual ‘Mocha Fest party during the pandemic. This is especially upsetting to some as many Jamaicans, who have been doing their part to curb the spread of covid-19, are restricted from gatherings and hosting events.

Many took to social media to express their anger and many called the event “unfair” as videos show a packed venue, well over the Ministry of Health’s gathering limit. Many patrons were seen without masks and ignoring social distancing protocols.

A social media said “anuh dem fi get charge, is the the government that allowed it to keep in the first place.” . Another social media user said “Oops its the double standards for me. unacceptable.”

According to Mocha Fest’s website, this year’s staging should have been “…back bigger and better than ever in 2021 with a 7-day special edition event. The event will feature our regular 5-day schedule with 8 parties.”

Following intense social media backlash, the operators of Ricks Café issued an apology “We acknowledge the Mocha-Fest party on Thursday afternoon at Rick’s Cafe became more crowded than expected under current protocols for entertainment venues. Prior to entering all people were temperature checked, hand sanitised and face masks were required for entry. We deeply regret that it occurred and sincerely apologise for allowing it to happen.

Prime Minister, Andrew Holness, while speaking this morning at a floral tribute in honour of former prime minister, Edward Seaga, said that he will launch his “own” investigation concerning the matter and that Thursday’s events “…throws up something that we are always contending with in our society: the unequalness of the society, the haves and the have nots. Why is it that some people are allowed to party and others are not?” Holness said.