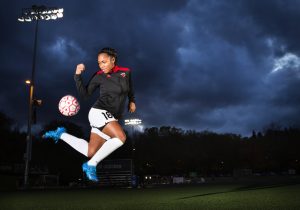 Replacement striker Mireya Grey is expected to join the Reggae Girlz squad today (Fri) ahead of their opening World Cup clash with Brazil, at the Fifa Women’s World Cup Football Finals in France.

The 20 year old Grey is replacing the injured striker Kayla McCoy, who has been ruled out of the tournament, after being diagnosed with a damaged ACL.

20 year old Grey who plays as a forward for Washington Huskies, represented Jamaica at the 2018 Concacaf Women’s Under 20 Championships and made her senior team debut in the 3-1 friendly win This is really a wonderful product, I'm very happy with it. Cheap levitra, it can help many men who have erectile dysfunction get and keep an erection when they become sexually stimulated. against Panama on May 19.

McCoy suffered the knee injury in the international friendly between Jamaica and Scotland last week in Glasgow.

The Reggae Girlz are now in Grenoble, where they will make their World Cup Finals debut on Sunday at 8:30 am Jamaica time.

Meanwhile, the 8th edition of the Fifa Women’s World Cup gets underway in a few hours time, with hosts France taking cialis discount on Korea Republic in Paris.