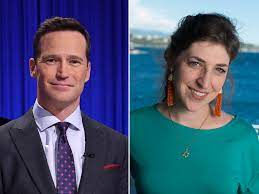 “Jeopardy!” has spent the past seven months rotating 16 guest hosts at the podium once manned by late host Alex Trebek.

Some, including LeVar Burton and former champ Ken Jennings, were contenders for the permanent slot, while others, such as “Good Morning America” anchor Robin Roberts, were paying tribute to Trebek’s legacy.

The new season of the trivia game show – where contestants must answer clues “in the form of a question” – will debut on September 13.

It will be the programme’s 38th season.