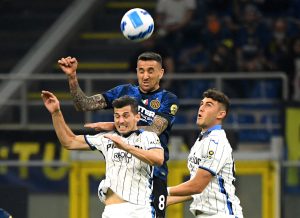 Inter Milan maintained their unbeaten record in Serie A with an entertaining canadian pharmacy ed 2-2 draw against Atalanta on Saturday that featured late drama, as the champions missed a penalty and the visitors had a match-winning goal ruled out.

A sublime Lautaro Martinez volley put Inter in front after five minutes, but Atalanta turned the game on its head before the break with goals from Ruslan Malinovskyi and Rafael Toloi.

Edin Dzeko pulled the hosts level after 71 minutes, before Federico Dimarco’s penalty came off the bar with four minutes remaining and Roberto Piccoli’s last-minute strike was disallowed because the ball went out of play in the build-up.

The result leaves Inter in third place on 14 points.