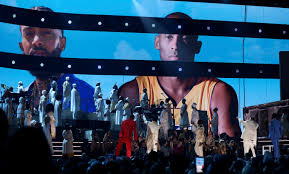 John Legend, Meek Mill, DJ Khaled and a host of musicians paid tribute to Nipsey Hussle at the Grammy Awards, filling the vast stage levitra 20mg tablets with a soaring performance of his music.

The tribute kicked off with Mill performing a new song called “Letter to Nipsey,” which mentioned a letter President Barack Obama wrote in Hussle’s honour. Mill rapped..“When we lost you, it really put some pain on me,” …. “Real hitters never die.”

Then DJ Khaled and Legend sang their collaboration with Hussle, DJ Khaled’s track “Higher,” which later won the Grammy for best rap/sung performance.

Legend sang while playing the piano as a choir sang along with them. Other performers including Kirk Franklin, Roddy Ricch and YG, each took turns doing solos.

The tributes to Hussle were made even more poignant by the loss earlier in the day by another icon of Los Angeles — basketball superstar Kobe Bryant.

Hussle’s image was beamed onto the back of the stage, beside one of Bryant.