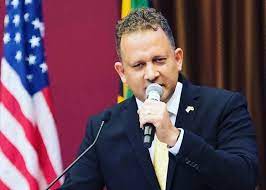 Preliminary reports from the Consulate General of Jamaica in Miami are that Jamaican citizens residing in Florida fared well during the passage of hurricane Ian.

Hurricane Ian made landfall along the southwestern coast of Florida, as a powerful category 4 storm, on Wednesday.

It has since been downgraded to a tropical storm.

Jamaica’s consul general in Miami Oliver Mair, noted that the weather has largely returned to normal in south Florida.

Mr. Mair noted that the consulate has been in contact with Jamaicans in the state, most of whom were spared significant impact.

He said Thursday will be used to make further assessments of the hurricane’s impact.

And with the storm projected to impact Jamaicans in north and south Carolina and possibly Georgia, the consulate remains on the alert to provide assistance where necessary.