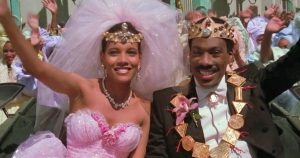 The long-anticipated sequel to the Eddy Murphy classic is in the process of being sold by distributor Paramount Pictures to Amazon Studios, in a deal worth roughly $125 million.

The sequel was originally slated to hit theaters on cialis fast August 7, 2020 before a Christmas release window was considered.

The first “Coming to America” was directed by John Landis in 1988, and saw Murphy as the charming African prince Akeem, who traveled to New York City to escape an arranged marriage. Arsenio Hall, James Earl Jones, Shari Headley and John Amos co-starred. The film grossed nearly $300 million at the worldwide box office.

In the sequel, Prince Akeem is set to become king of the fictional country of Zamunda when he discovers he has a son he never knew about in America — a street-savvy Queens native named Lavelle. To honor the former king’s dying wish to groom his grandson as the crown prince, Akeem and Semmi set off to free cialis sample America. Murphy, Hall and Jones are reprising their roles. The film stars Jermaine Fowler and supporting cast includes Tracy Morgan, Leslie Jones, Arsenio Hall and Wesley Snipe

premiere date will be December 18.