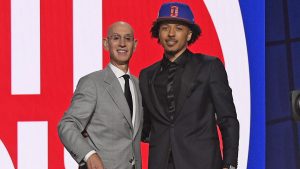 Cade Cunningham has been selected as the number one pick at the NBA draft by the Detroit Pistons.

Terrence Clarke, the NBA prospect killed in a car accident in April aged 19, was made an honorary pick.

The Houston Rockets had the NBA’s worst record at 17-55 last season and they chose 19-year-old shooting guard Jalen Green with the draft’s second pick.