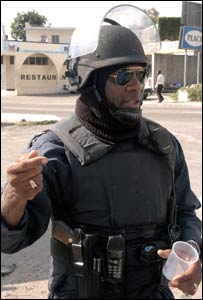 Reports are that former Senior Superintendent of Police Reneto Adams is currently on a ventilator after being admitted to hospital.

Mr. Adams reportedly blacked out after a fall at his home, and was taken to hospital for testing, and his COVID results came back positive.

He is reportedly symptomatic.

Adams retired from the Jamaica Constabulary Force in June 2008 after spending close to 41 years with the force.