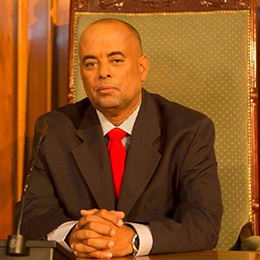 General Manager of Broadcast Services at the RJRGLEANER Communications Group, Claire Grant, tweeted this morning and confirmed his passing, she wrote, “It is with deep regret that TVJ, JNN, the RJRGLEANER Communications Group announces that our colleague, friend, veteran broadcaster, newsman Michael Sharpe died this morning. Condolences to his family and friends. Peace Michael”.

Other members of the media fraternity also took to social media to pay tribute to the late media personality. Dionne Jackson Miller tweeted, “I am absolutely gutted at Michael Sharpe‘s death. Michael interviewed me and recommended that News Editor Jennifer Grant hire me as a news correspondent in Montego Bay, he gave me my 1st chance to host a radio programme, co-hosting our Sunday news programme Exposure with him”. Karen Madden also tweeted, “One of his most wonderful qualities which I admired most was “bussing yutes” I’m so happy I repeatedly told him this”.

Prime Minister Andrew Holness also took to social media to express his condolences. On Instagram, he wrote, “I offer my condolences to his family, friends and wider journalism fraternity as we remember his unwavering service to Jamaica and media”.
The Jamaica Constabulary Force also expressed condolences following the passing of Sharpe, who served the force and the people of Jamaica for several decades as a District Constable.

Sharpe was hospitalised last month with an undisclosed condition. He was 65 years old.