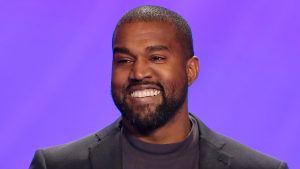 A pair of Kanye West’s prototype Nike Yeezy sneakers is on the run for 1 million dollars.
West’s first-ever Yeezy sneaker is set to be auctioned off by auction house Sotheby’s. The sneaker will go down in the history books as one of the most expensive shoes to ever be auctioned.
Sotheby’s made the announcement yesterday via Instagram with a post of the famous footwear. The photo was captioned, “Kanye West ‘Grammy Worn’ Nike Air Yeezy 1 Prototypes, the iconic sneakers worn during the artist’s memorable and emotional performance of ‘Hey Mama’ and ‘Stronger’ at the 50th Annual Grammy Awards in 2008. The pair introduced the Nike Yeezy to the world, redefining what a signature shoe could be. Created exclusively for Kanye, the Air Yeezy was an entirely new silhouette – designed for an artist rather than an athlete – and paved the way for many of the artist collaborations of today. One of the most prized and sought-after sneakers in existence, the pair is on offer via private sale from Ryan Chang.”
West’s multi-million dollar company started in 2008 when he partnered with Nike. He eventually split from them in 2013 in order to partner Yeezy with Adidas, and they remain in business together to this day.
The sneakers will be available for viewing at the Hong Kong Convention and Exhibition Centre from April 16 to April 21. The prototypes are expected to fetch over $1 million when they sell. Interested parties are being invited to submit offers directly to Sotheby’s for consideration.