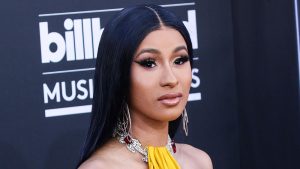 On the heels of announcing her doll collection with “Real Woman Are”, Cardi B has created history yet again.
The rapper’s 2017 hit single, ‘Bodak Yellow’ has officially attained diamond status in the United States— the first female rapper in history to receive the certification.
According to the Recording Industry Association of America (RIAA), ‘Bodak Yellow’ earned the certification on March 3, 2021. Equivalent to 10x platinum, the award signifies at least 10 million in US units. Each unit is equal to 1 paid download or 150 streams.
Cardi released ‘Bodak Yellow’ in the summer of 2017 and it didn’t take long for the song to take off. Within a few months of its release, the track hit number 1 on the Hot 100 chart and stayed there for three weeks.
Another one of Cardi’s hit singles, ‘WAP’ has also been certified 5x platinum.
Back in December, Cardi B achieved a major milestone when she became the first female rapper to have two songs cross the 9x-Platinum mark.