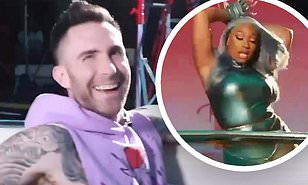 Maroon 5 have announced a new single, “Beautiful Mistakes” featuring Megan Thee Stallion, which will be released on March 3.
Maroon 5 had teased the collaboration earlier this month by sharing behind-the-scenes pictures of the music video on their Instagram Story.
Maroon 5 also tweeted out a lyric last week.
Both acts confirmed the single’s title and release date and shared its cover art on social media.
Meanwhile, Maroon 5 frontman Adam Levine recently teamed up with Jason Derulo on “Lifestyle,” which debuted at No. 95 on the Billboard Hot 100 last week.