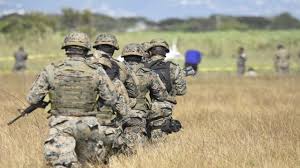 The Jamaica Defense Force JDF says its not engaged in a recruitment drive at this time, for the Jamaica National Service Corps JNSC.
According to the army, it is awaiting the outcome of the budgetary approval process, at which point, it will determine the extent to which it will proceed.
The JDF says it has received an overwhelming response from young Jamaicans, who heard a voice note circulated on social media, encouraging persons to register in the JNSC.
It says the voice note did not originate from the JDF and was not officially endorsed.