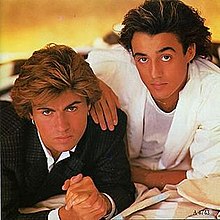 Wham!’s Last Christmas has topped the UK singles chart for the first time, 36 years after it was first released.

The festive classic was streamed 9.2 million times over the last week, knocking LadBaby’s ‘Don’t Stop Me Eating’ off the top spot.

First released in December 1984, George Michael and Andrew Ridgeley’s song was held off the top spot by Band Aid’s ‘Do They Know It’s Christmas’?

Ridgeley said he was “somewhat amazed” the record had now reached number one.

He said he was “delighted” and “profoundly pleased” at the news, “albeit 36 years after its first release which is, perhaps more than anything, a testament to its timeless appeal and charm”.