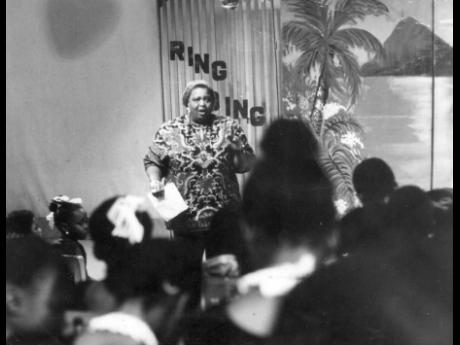 Probably no other local TV show has shaped more careers in Jamaican arts and entertainment than Ring Ding. The other “contest-format” talent shows like Tastee and the later Rising Stars may have provided a bigger spotlight – particularly for vocal talent. But in the annals of true variety show entertainment, many will look to or remember Ring Ding, with Miss Lou’s clarion call “Concert Time!” as the model for the format.

From 1965 to 1982 Miss Lou produced Miss Lou’s Views, a series of radio monologues, and in 1969 started hosting the children’s television program Ring Ding. Airing until 1982, the show was based on Bennett’s belief “that ‘de pickney-dem learn de sinting dat belong to dem’ (that the children learn about their heritage)”. As part of the program children from across the country were invited to share their artistic talents on-air.

Musical director Marjorie Whylie, herself an iconic figure explains “The idea of the programme was to introduce people to Jamaican culture and it grew to expose the children that brought in their material,” .

As host, Miss Lou brought on the various talents, exhorted the in-studio audience to “Clap dem!” and also performed herself from her vast repertoire of poems and songs.

The show ran from 1969 through 1980. Though it ended somewhat abruptly, Ring Ding had more than made its mark on countless Jamaican youngsters and helped to give some future big names their earliest push.