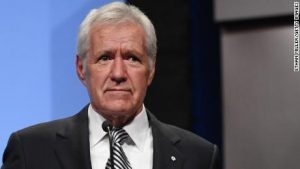 long time host of ‘Jeopardy’ Alex Trebek has passed away at the age of 80 after a
year-long battle with stage 4 pancreatic Cancer.

The Jeopardy Twitter account said he “passed away peacefully at home” surrounded by friends and family on Sunday.
Immediately after announcing his diagnosis, Trebek had continued to work on Jeopardy while undergoing chemotherapy.

He stated that he endured various episodes of depression throughout his treatment
but he saw giving up as a disservice to his wife, God and other cancer patients. Back in 2019 his tumor shrunk 50 percent but he continued to undergo the chemo
treatments and maintained a positive attitude.

Fellow talk show host Steve Harvey posted a message on social media saying, “my heart is so sad over the passing of the classiest game show host of all time!! his style was real to me, condolences to his entire family and fans”.