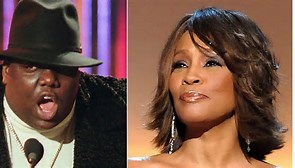 Whitney Houston was inducted into the Rock & Roll Hall of Fame, which aired on HBO. Alicia Keys gave the late icon’s induction speech, beginning, “Whitney Houston is one of one.”

Keys went on to recall meeting Houston, working together on “Million Dollar Bill,” and her impact on music and the world.

Meanwhile, Diddy officially inducted The Notorious B.I.G. into the Rock and Roll Hall of Fame on Saturday during a ceremony broadcast on HBO.

Diddy, who signed Biggie to his Bad Boy Records imprint in 1993, delivered an impactful speech about his late friend and collaborator, pointing out his inimitable swagger.

Nas then stepped up to the podium and talked about Biggie’s trailblazing ways.

The segment closed with Biggie’s children speaking on his legacy.