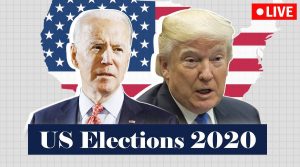 Donald Trump and Joe Biden are each confident of victory in the US presidential election, as the outcome hangs in the balance with both sides embroiled in a legal fight over votes.

Vote counting is still going on in crucial battleground states that will decide the election.

Projected wins in the Rust Belt states of Michigan and Wisconsin have inched Biden closer to victory.

As results trickle in, Trump has challenged vote counts in key states.

The president has made unfounded assertions of victory and allegations of voter fraud, accusing Democrats of trying to “steal” the election.

Biden stopped short of declaring victory, but said he was confident he was on course to beat his Republican rival.

The Democratic candidate is currently leading in Nevada and Arizona, while the gap is closing between him and Trump as counting continues in Georgia and Pennsylvania.

According to the US Election Project, overall turnout in Tuesday’s election is projected to be the highest in 120 years at 66.9%.