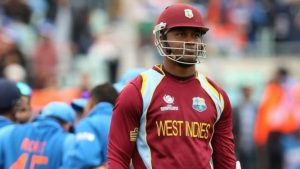 Jamaican Marlon Samuels has seemingly called time on his international career almost two years after his last game for the West Indies.
The 39 year old has revealed that he sent a letter telling the West Indies that he’s finished.
It’s the most recent in a string of several social media references about his cricketing career in the last 10 months.
Earlier this year, the two-time World T20 winner said he was taking a two year break from the game, having last represented the West Indies in an ODI against Bangladesh on December 14, 2018.