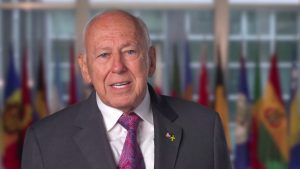 US Ambassador to Jamaica, Donald Tapia has apologised to Jamaica for controversial tweets made using his official Twitter handle on Tuesday evening.

The tweets were made following concerns on social media in response to a news article which featured statements by Ambassador Tapia about the US raising concerns over the prospects of using a Chinese firm to establish a 5G network in Jamaica.

According to Ambassador Tapia, he was not the one making the tweets.

He says the representative who was using his account will be sent back to the US.

Ms Johnson Smith says the ambassador has assured there will not be a recurrence.