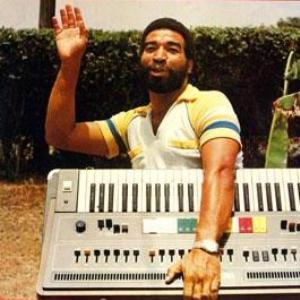 Born 1949 in Kingston, Jamaica, Collins started out as a drummer, switching to keyboards in the mid-1960s.

Among the great hts he played on as part of the Invincibles are “Pressure Drop” and “Sweet and Dandy” by Toots and the Maytals. The band also included Lloyd Parkes, Sly Dunbar and Ranchie McLean.

After working with producer Lee “Scratch” Perry, Collins formed a duo, Dave and Ansel Collins (alongside Dave Barker). The two had a major UK hit in the song ” Double Barrel.”  – with its spoken intro “I Am the Magnificent!..” which went to Number One. in 1971.  Collins is also a producer, and has released solo records, including single sides “Cock Robin”, “Atlantic One”, “Stalag 17” and “Nuclear Weapon” between 1969 and 1971, as well as a handful of later albums.

He was a key member of 1970s Channel One studio band, The Revolutionaries, as well as the Impact All Stars and Sugar Minott’s  Black Roots Players, performing on many of the classic songs of the roots reggae.  He was also part of Jimmy Cliff’s backing band, Oneness, in the 1970s. He continued to record during the 1980s, mainly as a sessions musician, and released a solo album in 1986.

Collins also worked with backing bands such as Lynn Tait and the Jets, as well as with guitarist Earl “Chinna” Smith and with deejay Errol Scorcher on a series of one-off recordings, including “Mosquitoes”, which was also a hit.