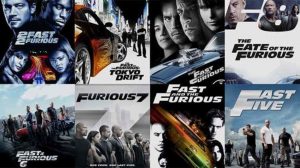 The long-running Fast & Furious movie franchise is to come to an end after two more films, according to reports.
Justin Lin will direct what will be the 10th and 11th films in the series.
The ninth film in the franchise will be released in May 2021, having been put back a year by the Covid-19 pandemic.
The action-packed film series began in 2001 with The Fast and the Furious, starring Vin Diesel, Michelle Rodriguez and the late Paul Walker.
The franchise has since expanded to incorporate eight direct sequels, one movie spin-off and an animated TV series.
The series – which includes last year’s Fast & Furious: Hobbs & Shaw – has so far generated $5.7bn  worldwide.
Furious 7, released in 2015, is the most successful instalment to date, having made $1.5bn.
According to reports, the final two films are likely to tell “a big story” that will reunite all the series’ core cast members