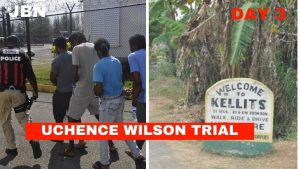 Uchence “Terrence” Wilson, the alleged mastermind of the St Catherine-based Uchence Wilson Gang, was this afternoon found guilty of two counts of illegal possession of firearm and shooting with intent.

Chief Justice Bryan Sykes said Wilson, by his own account, had verified testimony of a senior police officer who had taken the stand during the trial and told of an incident in which officers, acting on information from a crony of Wilson, went to accost him and were involved in an exchange of gunfire in which Wilson was injured.

Thirteen remaining individuals, who were among close to 30 arrested by the Counter-Terrorism and Organized Crime (C-TOC) unit in 2017, are on trial, and are said to be part of one of the island’s most organised and vile gangs, responsible for robberies, extortions, rapes, murders and the pilfering of a number of licensed firearms.

Since the beginning of the trial in March 2019, a number of the accused have walked free, with the Crown’s case against them falling apart due to insufficient evidence.