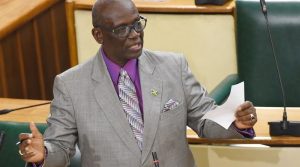 Local Government Minister Desmond McKenzie has revealed, that a local Olympian is now facing prosecution, for allegedly hosting parties in the late night, in clear contravention of the COVID curfew.

Mr. McKenzie refused to identify the Olympian or the Kingston based entertainment venue involved in the breach, only pointing out that he summoned the management of the facility to a meeting yesterday.

The Minister used the incident as a warning to other party promoters and venue owners, who will be targeted in the coming weeks, for not adhering to the curfew.

Speaking at a press conference yesterday, Mr. McKenzie lamented that many Jamaicans still refuse to take personal responsibility in the fight against the coronavirus.

He said in this particular incident, as recent as last Sunday, the police arrested and charged the persons allegedly involved.