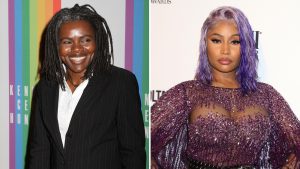 A judge handed a significant win to Nicki Minaj on Wednesday, finding that she did not commit copyright infringement when she created a song based on Tracy Chapman’s “Baby Can I Hold You.”

The ruling protects the industry practice of developing a new song based on existing material, and then seeking a license from the original artist prior to release.

U.S. district judge Virginia A. Phillips ruled that Minaj’s experimentation with Chapman’s song constitutes “fair use” and is not copyright infringement.

At the time, she believed it was a remake of a song created by Shelly Thunder, and was surprised to discover later that most of the lyrics and some of the melody came from Chapman’s “Baby Can I Hold You,” which was released on her debut album in 1988.

Minaj’s representatives reached out to Chapman for permission to use the song, but Chapman repeatedly refused. According to her suit, she has a blanket policy against granting such permission. “Sorry” was then dropped from Minaj’s 2018 album, “Queen.”

However, a copy of the unreleased track made its way to DJ Flex, a New York radio DJ who played