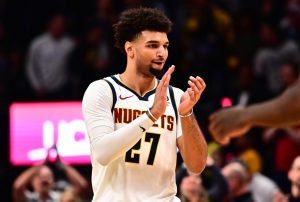 Jamal Murray demanded the likes of Shaquille O’Neal and Charles Barkley start giving the Denver Nuggets “some damn respect” after their Western Conference semi-final heroics.
The Nuggets dominated the Los Angeles Clippers 104-89 in Orlando on Tuesday to progress from an all-or-nothing Game 7, becoming the first team to recover from a 3-1 deficit twice in the same postseason.
Few tipped the third-seeded Nuggets to get past a Clippers team comprising the likes of Paul George and Kawhi Leonard, particularly when the team found themselves in such a precarious position.